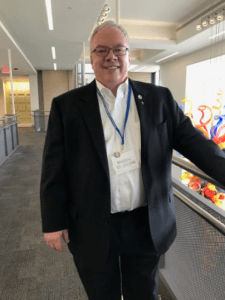 IT Security Solutions, Inc. is led by its founder, Albert E. Whale.  Mr. Whale brings over 30 years of Information Technology experience to the table and is known as a thought leader in the cyber security world. He began focusing on cyber security exclusively during 9/11 and has supported multinational corporations, small to medium-sized businesses, and government projects as well as cyber security training initiatives for numerous organizations, including the United States Air Force.

The tragic circumstances surrounding 9/11 coupled with his patriotic loyalty as a U.S. Military Veteran prompted him to redirect his efforts towards implementing security solutions to address the ever-increasing need to protect our nation.

Mr. Whale has extensive work in GRC matters, stemming from his experience leading one of the largest software development projects initiated by the Department of Veterans Affairs.  During his time at Engility, Mr. Whale was able to change the course of security controls, which were addressed by leadership to improve the implementation of security in software. This saved the Veterans Health Administration more than $1M in 6 months.

A few of Mr. Whale’s other accomplishments include being a co-founder and sponsor of the Pittsburgh FBI InfraGard; developing security tools for protecting *nix based servers on Internet and Intranet networks; working with large-scale, government-sponsored software development projects; and implementing security into the SDLC before it was completed. His background is extensive and ranges from application development and security to training and enterprise security solutions. He has even worked with Wiley & Sons, serving as a technical editor for their CEH v8 book.

Mr. Whale currently serves on the advisory board for the EC Council and Pittsburgh Technical College. He was invited to work with The Founder Institute in refining and launching ITS SAFE™. The Founder Institute is a globally recognized organization focused on mentoring entrepreneurs from the idea stage to the launching of their business. IT Security Solutions, Inc. is one of seven organizations to graduate from the original cohort of 50 companies that applied.

When interviewed on television or through other media channels, Mr. Whale is considered a Cybersecurity thought leader providing an understanding of the security and privacy issues of the day and their relevance in today’s world.

Two of his favorite quotes are:

Any cookies that may not be particularly necessary for the website to function and is used specifically to collect user personal data via analytics, ads, other embedded contents are termed as non-necessary cookies. It is mandatory to procure user consent prior to running these cookies on your website.